The illuminating history of lighting

Categories:
History Uncovered, Things To Do

Forget the cold – the worst thing about winter is the dark. You wake up in the dark cheap levitra buy online euro and get home in the dark. If you work indoors, you may sneak a slither of sunlight at lunchtime if you’re lucky, but that’s your lot. The NHS estimates that 1 in 15 people get Seasonal Affective Disorder in the UK – a kind of depression brought on by a lack of natural light.

But at least we can light up our houses at viagra 50 mg pfizer the flick of a switch. We can read, cook, do housework (and watch English Heritage videos on YouTube) into the wee small hours of even the darkest nights.

For most of our history, all that was an unthinkable luxury. Fires, small candles, lamps and moonlight were all we had at our disposal to lengthen our days.

In this blog we’re shining a light on this centuries-old struggle to overcome darkness.

Throughout December this year we’re opening up some of our places and filling them with magical illuminations to light up the dark. There’ll be unique trails at the sites, each one inspired by stories from the past. You can book your tickets now at our sites cross the country.

Humans discovered how to control fire at least 120,000 years ago. It’s likely that the discovery was made independently by people all over the world. It generic levitra purchase had a profound effect on how our species developed.

Our ancestors would have known about the power of fire long before they learned cialis next day delivery how to harness it. When fires broke out in lightning storms, people might have organised themselves to catch animals fleeing from the flames. And the land scorched by the fire would have be easier to forage.

Wildfires might have been cheap generic cialis uk kept burning by people with wood and animal dung. From there, we learned how to use flints to spark our own fires from scratch.

Animals and plants caught in wildfires would have been ‘cooked’, making them more nutritious and easier to digest. The extra calories that we got from cooked food were crucial to the development of our big, energy-burning brains.

Fires were important for cooking and keeping warm, but they must have been important as a source of light too. Some researchers think that that early cave art may have been ‘animated’ by the flickering of flames – and light would have been used as a storytelling device. At Avebury, one of the places in our care, archaeologists have recently found evidence of two huge wooden monuments built over 5,000 years ago. Made of over 4,000 trees and stretching for two and a half miles, it’s thought that they were deliberately burned in a kind of one-off festival.

By the time Stonehenge was built, we’d been burning our fingers on flames for millenia. But we were also looking up to the sun, moon and stars for spiritual inspiration and practical guidance.

The stones at Stonehenge (and at other prehistoric sites like Castlerigg in the Lake District) are aligned to mark the movement of the sun at particular times of year, especially midsummer and midwinter. Recent findings argue that rituals at the midwinter solstice were the most significant for the people who built and used Stonehenge. It would have been a time when people longed for the return of longer, warmer days, when crops could grow and animals could graze. At midwinter the sun sets between the two upright stones of the great trilithon, and evidence from the nearby prehistoric settlement of Durrington Walls has shown that huge feasts took place around midwinter.

You can visit Stonehenge throughout the year. Find out more about feasting near the stones on YouTube or at our Feast! exhibition, which runs until September 2018.

A reconstruction of midwinter solstice at prehistoric Stonehenge

The ancient Mediterranean world was dotted with lighthouses to help guide ships. The Romans brought the concept to Britain. One of the world’s only three surviving Roman lighthouses can be found at Dover Castle in Kent. It was build soon after the Roman invasion of Britain, in the middle of the first century AD.

On a domestic scale, the household fire was probably the main source of light for most people up until the 19th century.

Interestingly, in medieval towns fires had to be put out after a particular time at night to stop the risk of fires spreading. The word for this time was curfew, which comes from the Old French couvre-feu, meaning ‘cover fire’. People would use bell-shaped ceramic ‘curfew covers’, which were ventilated so that fires would keep smouldering overnight. They could be blown back into life the next morning with bellows.

The Romans are thought to have invented the dipped candle. In the medieval period, beeswax candles could only really be found in churches and richer households. Poorer people would make do with firelight, rushlights or tallow.

Homemade rushlights were made by rolling the dried pith of rushes in fat to make a rough and ready, with the pith as the wick. They burned quickly – one 40cm long would burn for about half an hour.

Tallow candles were another cheap option, and they burned for longer than rushlights. Made of a kind of rendered animal fat, they were a nasty brown colour and could give off an even nastier smell.

It wasn’t until the 18th century that lamps provided a real leap forward, at least for the upper classes. A new type of oil lamp that provided as much light as ten candles was invented by French chemist Ami Argand in 1780.

John Griffin, the forward-thinking owner of Audley End House in Essex, was an early adopter. He bought his first Argand lamp in 1785 and added 22 more to his collection over the years. You can still see two of them in the Dining Room of the house today.

William Murdoch made a breakthrough with gas lighting in the late 18th century, and in 1807 13 gas lamps were installed along Pall Mall.

By the 1820s more than 40,000 gas lamps were burning along 215 miles of London’s streets. They were also being used to light shops, theatres and factories. Years later the novelist Robert Louis Stevenson wrote that, with gaslight, ‘a new age had begun for sociality and corporate pleasure-seeking…the cityfolk had stars of their own; biddable domesticated stars…’.

There are still 1500 gas lamps in London, and British Gas employs five engineers to maintain them. 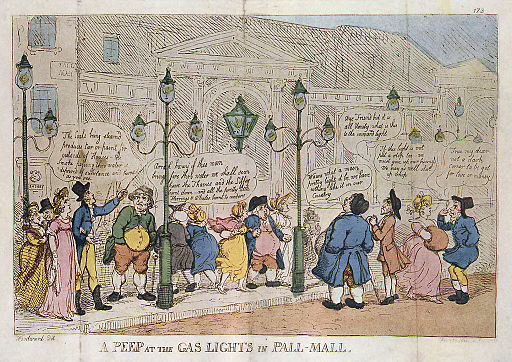 ‘A Peep at the Gas Lights in Pall Mall’, by Thomas Rowlandson 1809, via Wikimedia Commons

The technology took a little longer to get into our homes, but in the 1840s it began to catch on, at least among the middle classes. The Englishwoman’s Domestic Magazine recommended that parties ‘must always be given by gas light … if it be daylight outside, you must close the shutters and draw the curtains’.

But gas could be dirty and dangerous. Impure gas gave off a bad smell, blackened walls and ceilings and took gilding off picture frames. It caused headaches, made rooms unbearably hot, and killed off all but the hardiest of household plants. The Victorians loved aspidistras because they were one of the few plants that could survive. One interior designer called gas lights ‘a disgrace to modern science and civilisation’.

Even worse were the explosions. One at the Nine Elms gasworks in Battersea killed nine people. The Illustrated London News reported in November 1865 that ‘people nearly a mile off were thrown violently down, and persons who were in houses and streets adjacent to the works received severe burns’. The first gas powered traffic lights were installed on Westminster Bridge in the 1860s, but they exploded and injured the policeman operating them.

Light at the flick of a switch

The first electric lights were developed in the late 1870s by different people across the world. In Britain, Joseph Swan led the charge. He installed his lights at Cragside House in Northumberland in 1878. A year later Mosley Street in Newcastle was the first in the world to have electric streetlights.

Thomas Edison was working on his own light bulbs at the same time. He tried to sue Swan for infringing his patent, but the two men ended up joining forces to form the Swan and Edison Company.

Queen Victoria was keen on the technology. She had electric lights installed at Osborne on the Isle of Wight. You can see electric light fittings in the Durbar Room and the Drawing Room, and we have a selection of original Swan and Edison light bulbs in our collection.

Close up of a light fitting in the Durbar Room, Osborne

It was only after the First World War that electricity found its way into most of our homes. Lightbulbs improved and the National Grid was established. For the first time in human history, we had clean, safe lighting at the flick of a switch.

Today we take light for granted, but there’s still an undeniable magic and mystery in darkness. And on when the nights are at their longest, lights still have the power to amaze and delight – and nowhere more so than at our series of Enchanted events in December. You can book your tickets now to guarantee entry.

The illuminated gardens of Osborne House on the Isle of Wight

Enchanted Gardens events are taking place at five of our historic places throughout December 2018.

Choose a date and book your tickets