September 2017 marks the 150th anniversary of the publication of the first volume of Das Kapital, Karl Marx’s famous critique of capitalism. In this blog, blue plaques historian Howard Spencer explores Marx’s life in London, and tells us about five other political exiles commemorated with a plaque.

From 1849 until his death in 1883, Karl Marx was based in London. His time in the city is commemorated by a blue plaque at 28 Dean Street, Soho, put up exactly half a century ago. Here, in shabby rooms on the second floor, lived the six members of the Marx household.

It was not a happy time. Two of the Marx’s children died during their time in Dean Street, which lasted from 1850 to 1856, beginning with a brief spell at the now-demolished number 64. But it was also during this period that Marx began work on Das Kapital, working mostly in the Round Reading Room at the British Museum. 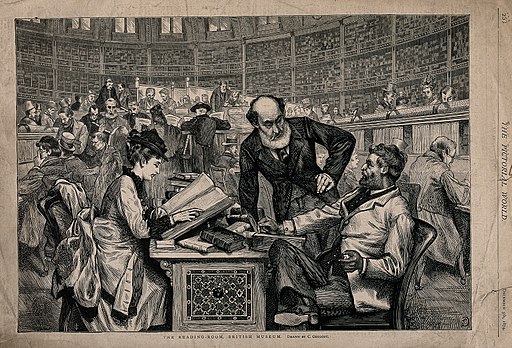 An 1874 engraving of the Reading Room in the British Museum

In 1856 the family moved north, to the western part of Kentish Town. Their first address was 46 Grafton Terrace – then numbered 9 – which still stands. Later Marx lived at two houses in nearby Maitland Park Road, both now demolished.

Marx’s financial circumstances were always precarious. In 1862 he applied for a clerkship with the Great Western Railway, but was turned down on account of his atrocious handwriting.

Marx died in March 1883 at 41 Maitland Park Road. This house was marked with a blue plaque in 1935, but this was smashed by fascist supporters. The same happened to its replacement, and the homeowner declined to have another.

The block of flats that now occupies the site bears a plaque put up by the local council. And the official blue plaque to Marx’s collaborator and benefactor Friedrich Engels remains present and correct not far away at 122 Regent’s Park Road. The Marx’s daughter Eleanor also has a plaque, at 7 Jews Walk, Sydenham.

Marx is buried at Highgate Cemetery. As far as we know, he never set foot in the Marx Memorial Library in Clerkenwell Green, but Vladimir Lenin is supposed to have worked there while in exile from Russia in 1902-3.

The grave of Karl Marx in Highgate Cemetery, London

Marx’s blue plaque is one of a small handful to have nothing in the inscription about what he actually did – just his name, vital dates, and ‘lived here’. The arguments about Marx’s legacy will go on, but in terms of his historical impact, his name speaks for itself.

The Austrian Chancellor was the architect of the European order that was overthrown by the 1848 revolutions. He found refuge in London. His plaque can be found at 44 Eaton Square, Belgravia – a house described by Metternich’s wife as horribly expensive.

Known as the father of Russian socialism, Herzen once wrote that life in London was ‘as boring as that of worms in a cheese’. He nonetheless stayed 12 years, and his plaque is at 1 Orsett Terrace, Paddington, where he lived in the 1860s.

The last Bourbon king of France lived quietly at 72 South Audley Street between 1806 and 1814, while Napoleon ruled his homeland. Charles was back in England in 1830, having lost his crown thanks to the unpopularity of his autocratic rule.

The revolutions of 1848 briefly produced an independent Hungary, with Lajos (or Louis) Kossuth as its leader – and a focus for the hopes of European liberals. This regime did not last, and Kossuth ended up in London, where he lived at 39 Chepstow Villas, Notting Hill from 1852-53.

One of a number of South American leaders to have found a refuge in London, Bolívar stayed at 4 (then numbered 27) Duke Street, Marylebone in 1810. He went on to play a leading role in the establishment of Venezuela, Colombia, Ecuador, Bolivia, Panama and Peru as states independent of rule from Spain.

Find out which London buildings are lucky enough to have a pair of plaques, or read why some people don’t get blue plaques.

Head to our website to read more about Karl Marx’s blue plaque, or search the records of over 900 other London blue plaques.

And if you want to go plaque spotting yourself, make sure you download the Blue Plaques app for Android or iPhone before you go.